Australian South Sea Pearls are world renowned for the beauty and value.

The heart of the Australian Pearl industry has historically been located in Broome, Western Australia. Initially, Broome was the centre for Mother of Pearl (MOP) collection and worldwide distribution. The collection of Oysters for its shell in the region was prolific from the mid 1800’s until World War Two. The MOP was used to make buttons and jewellery however the invention of plastic replaced MOP buttons. By the start of the 1940’s the industry had collapsed. Occasionally during the collection process, natural Pearls were found and sold for significant profit. 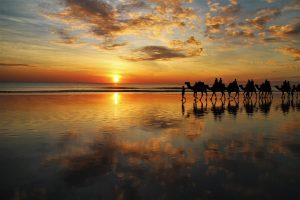 The famed Japanese Pearl producer Kokichi Mikimoto is widely recognised as the father of modern day Pearl cultivation. Using the Mise-Nishikawa method pioneered several years earlier, Mikimoto perfected the technique of Pearl seeding in the 1920’s. This resulted in beautiful, cultivated Japanese Pearls. The techniques pioneered by Mikimoto slowly spread across the world, first appearing near Broome in the mid 1950’s.

Broome and the Kimberley area of WA create the perfect environment for the collection of natural and farmed Pinctada Maxima Oysters. The majority of the oysters are harvested from the area south of Broome, near 80 Mile Beach. They are then transported to other areas of the Kimberley. These oysters are then seeded and hung in long lines for 1-2 years for the Pearl to grow. Each oyster usually only produces one Pearl at a time and may take 2 years for this to fully develop. The huge tidal variations, nutrient rich water, pristine natural environment and lack of pollution combine to produce the incomparable Australian South Sea Pearl.

Australian South Sea Pearls account for less than 1% of the World’s Pearl production but represent more than 25% of the total sales value.

The Australian Pearl Industry is heavily regulated and environmentally sustainable.