How are they formed?

Most varieties of bi-valve molluscs are capable of growing Pearls due to their ability to produce nacre (pronounced nay-ker). The nacre is essentially the same material which coats the inner surface of the mollusc and in oysters is known as ‘Mother of Pearl’. When a mollusc is attacked or irritated by an intruder, it traps and covers the irritant in nacre to protect itself. The irritant is slowly coated in thousands of layers of nacre resulting in a Pearl forming. 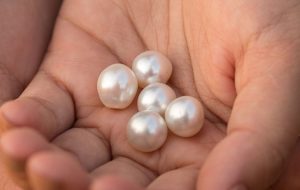 Natural – Pearls occur naturally in oysters and other molluscs as a defence against attack or infection. They are very rare and highly valued, they only occur every 1 in 10,000 – 12,000 oysters. Historically, natural Pearls were sourced by gathering oysters which resulted in the decimation of species. They are so rare that nearly all Pearls on the market today are cultured.

Cultured – Oysters are encouraged to grow Pearls by inserting a natural mussel seed and mantle tissue into them. The oyster then coats the seed in nacre, which produces the Pearl as we know it. The technique was first mastered by Japanese Pearlers whose expertise have launched a worldwide Cultivated Pearl industry.

Keshi – Keshi Pearls are formed during the culturing process when the oyster rejects the seed. The fact that they are seedless means that they’re composed entirely of Nacre. They form their unique shapes over several years and are rarely round. They are sold by their weight, not size and differ from natural Pearls only by the fact that they are created by human intervention. The word Keshi comes from Japanese meaning “Poppy”.

We recommend the GIA Pearl page for detailed information